Male color polymorphism (the presence of males of different colors in the same population), is common in many different species. This phenomenon is of great interest to evolutionary biologists because body color is often the target of both natural selection (because predators often eat conspicuous males) and sexual selection (because females often mate with conspicuous males). In this study, I developed a formal population genetic model that considered how natural and sexual selection might result in the long term maintenance of a male color polymorphism in a very heterogeneous environment. In this model, I used a simple model system of a hypothetical species of fish with both a blue and a yellow morph (this type of color polymorphism is very common in fish). Blue fish were more conspicuous to females and to predators when swimming at the bottom of a lake (against the yellow sandy bottom) but were less conspicuous when swimming in the blue open water. The opposite assumptions were made for the yellow morph. In this framework, I found that female preferences were required to keep both ma 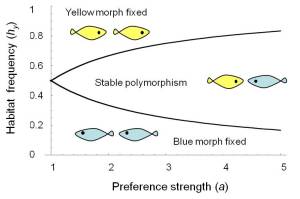 le morphs in the population. If females did not have a preference for color, then one morph or the other quickly went extinct. This work has interesting implications for the role of female preferences in shaping the diversity of life.